People talk a lot about synchronicity, referring to those significant or meaningful coincidences, and just recently three friends were reading the same book of mine around the same time.  This might not sound so strange for a well-known writer but for a relatively unknown like me, it was quite uncanny.  Maybe it coincided with a promotion I'd done, but then one of those reading this book would have been unaware of such a promotion.  Bear in mind too, that I have over a dozen books, then it starts to seem more curious.  The book in question is a novel I wrote a few years ago called Savage To Savvy. 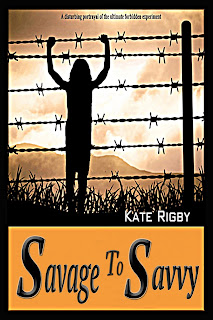 The plot is centred around a child reared by dogs, called Nicki. Psychology graduate, Heidi Harper is appointed to work with Professor Mala, pioneer of a new project to rehabilitate Nicki. Heidi is soon asking questions and her mission takes on sinister overtones. As the truth outs, the lives of all concerned begin to unravel. Savage To Savvy is a psychological novel about the ultimate forbidden experiment.

But the seeds for this novel were planted in childhood.

If anybody read Bunty as a child and is old enough to remember a story called The Taming Of Teresa about a child being reared by wolves (1969/70) that story has stayed with me for years. In 1985 I wrote to the publishers of Bunty as I wanted to read it again.  Luckily for me, they had the story in their Lucky Charm collection so they kindly sent me a gratis copy, even though I'm sure I'd have offered to pay.  So at last The Taming Of Teresa and I were reunited! 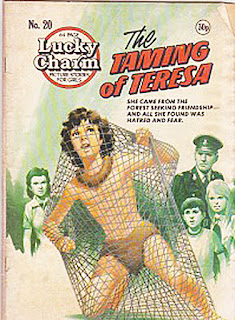 Not that I needed to be reminded of the story as I had in fact committed large parts of it to memory.  In fact, I tried to recreate it in an old exercise book complete with childish drawings. I think that must be because we had to throw out our old comics each week, I imagine (or after a few weeks). In fact, I used to remember the number of each installment and what happened in each, so much so, that when I finally got a copy of the Lucky Charm version over fifteen years later I saw that a small part of week 12 was missing – I distinctly remembered a man with a megaphone searching the grounds of the country house for Teresa who was hiding in a cave, or the like! 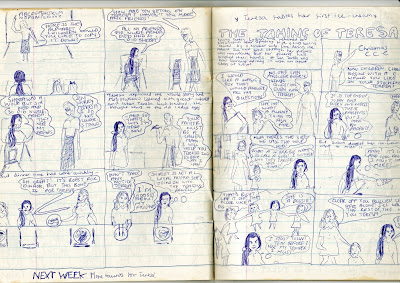 I guess the story about a child being reared by a wolf, like the ancient story of Romulus and Remus, taps into some archetype that resonates with us. For me, it stood out from the crowd, though I also had the usual favourites that inspire a ten-year-old's imagination. 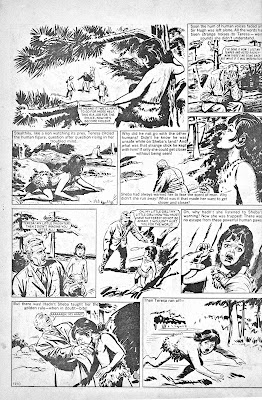 That story was the inspiration, many decades later, for Savage To Savvy. As a story for adults, though, Savage To Savvy has a much darker aspect.  It refers several times to The Taming Of Teresa (Heidi's mother has kept copies) which becomes relevant in the context of the story.

The other coincidence is the recent discovery of a site dedicated to all the girls' comics of the time, including Bunty. That site - Girls Comics Of Yesterday - lists many of the old Bunty stories (as well as those in Judy, Mandy etc).  I swear I have searched the internet for any mentions of The Taming Of Teresa before and the searches yielded nothing, not related to the Bunty story anyway.  And then I stumbled upon this site to find that not only are there others who loved the story as I did (that shouldn't be surprising, but it feels strange when you've felt in the wilderness with your passion for so long!) but the story was also reprinted in 1979 to a whole new generation.

I'd be interested to hear from others who remember this story, especially those for whom it made a lasting impression.

For more in formation about Savage To Savvy or where to purchase it please visit:
https://www.amazon.com/dp/B006ASBQAE

I have also recently created a Taming Of Teresa board on Pinterest: